Sharing today an excerpt from new release His Christmas Miracle.

In this, Kyle and Chrissie have a peaceful moment but again end up in a brawl 🙂

Kyle Masson’s marriage has been a sham. Now after two years of apparent happiness, all he’s left with, is a surrogate mother, pregnant with his child. Determined to at least be a proper father, he is ready to care for her throughout her pregnancy. But his experience has left him suspicious. Duped by one woman, he’s determined not to let Chrissie out of his sight. So, when she plans a trip to India without his knowledge, Kyle follows hot on her heels.
Chrissie feels oppressed by her situation. Kyle’s heavy-handed tactics are driving her mad and to complicate matters even further, she’s seriously attracted to him. Surely she can’t be drawn to a man this bossy? And then as she gets to know him, an insidious, impossible dream begins. That her baby should have both parents.
As compelling attraction drives them together, that wistful yearning appears to take on a hazy form.
But Chrissie knows her dreams are poised to be shattered. For she is bound to be only a surrogate, never a real mum.
Amazon book link:

Hi all, excited to share the cover reveal of my book, hosted by The Book Club. Many thanks to all who made the event a wonderful and successful one. Thank you also to lovely readers for the appreciation 🙂 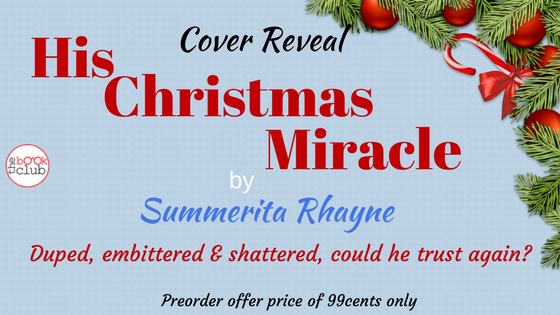 HIS CHRISTMAS MIRACLE
by
Summerita Rhayne
Blurb
Her impossible wish…

Kyle Masson, Irish billionaire, discovers he had been married to a con woman. Now, left with the pregnant surrogate mother for his child, he’s determined to focus on being a proper father and to care for her throughout her pregnancy. His experience has left him suspicious and cynical. Duped by one woman, he’s determined to not let the expectant mother, Chrissie out of his sight. So, when she plans a trip to India without his knowledge, he follows hot on her heels.

Chrissie feels oppressed by Kyle’s overbearing manner. After losing her father, she feels confused and alone and wants to get acquainted with the family he left in Goa. Kyle’s heavy-handed tactics drive her mad. But she’s also attracted to him. Surely she can’t be drawn to a man this bossy. And then an insidious, incredible wish begins. That her baby should have both the parents.

As compelling attraction drives them together, the improbable dream appears to take a hazy shape.

But Chrissie knows her dreams are poised to be shattered. For she is bound only to be a surrogate, never a real mother…

His Christmas Miracle is a sensual, but tender romance set in beachside Goa at coastal India. 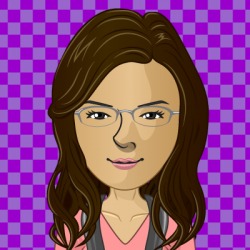 Summerita Rhayne writes contemporary and historical romance with lots of emotional conflict. She first got published in 2013 and has won contests with prestigious publishers such as Harlequin and Harper Collins India. Her pet belief is, if the inspiration is strong enough, the story characters will find a way to make the writer pen them down, even when writing time is in short supply. When cerebrally confronted with the sizzling interaction of two Alpha characters, the only way to get peace is write their book!
At heart, she’s a family person and even though she loves her medical teaching profession, she happily becomes a homemaker when not at work. She loves winding down with music, romcoms, cricket (strictly watching only) and social networking.
You can stalk her @ 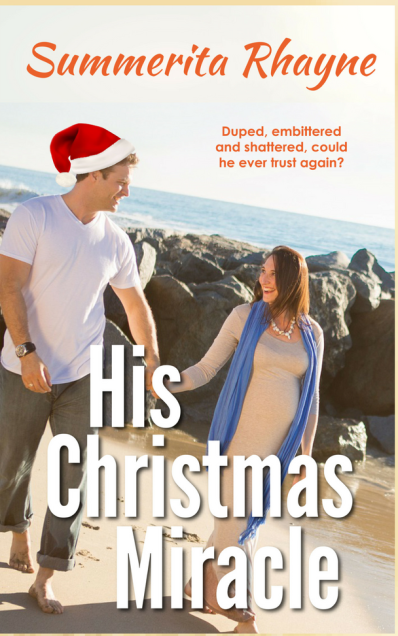 This Tour is Hosted by

It’s time to share an excerpt and so bringing a simmering snippet from Second Chance At Forever, semsual romance set in India.

‘An affair would do us good, you know.’ The words were so conversationally put. As ever, he succeeded in shocking her, putting into words what she had been trying to evade.

‘I’m sitting here looking at your picture on the monitor. Then I look at the earlier pictures – yes, I have them – and I can’t spot any difference…in the reaction they evoke in me.’

He had her pictures. For some reason, her stomach contracted as an image of him arose, sitting alone, looking at her picture displayed on a closely placed screen.

‘We used to be good together, Stuti. Are you wondering if it would be the same between us even now? I know I am.’

His voice stole over her, its insistence beguiling her senses. It’d be all too easy to give in, to keep listening to him and let magic of his nearness flow over her.

‘It was just sex,’ she said breathlessly.

‘Awesome, mind blowing sex. Wanna give it a go again?’

His voice was just that bit dirty to get heat thrumming under her skin. ‘Sex would solve nothing…’

Illicit images began to play in her mind. She couldn’t speak. Silence stretched. So long that she finally managed to croak out, ‘Revath…it’s not possible between us.’

‘Damn it, Stuti, playing the simpering maiden wasn’t your style. I never had to spell it out before. We didn’t even need to use words to communicate.’

‘Maybe we should have used them,’ she said. ‘Maybe we wouldn’t need to be like this if we had.’ It slipped from her quietly.

Check out this story of second chances and Stuti and her triplets at Amazon. 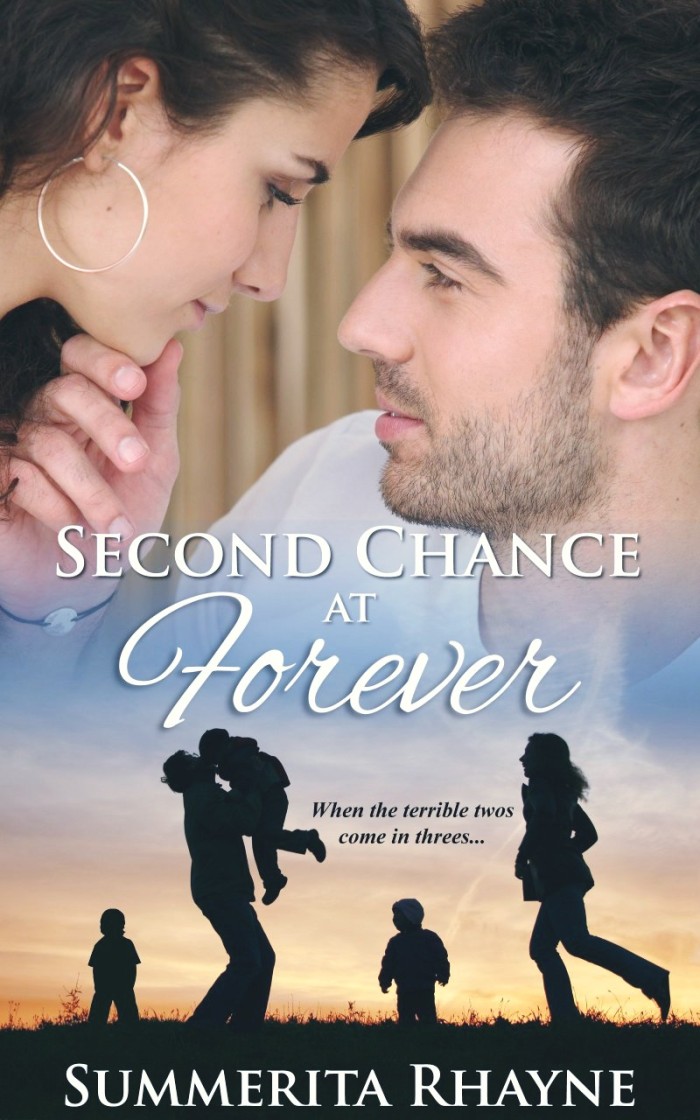 Thanks to readers of Sweet and Spicy romance books !

8 of my books are in the bestsellers charts among Amazon Indian books.

Check them all out at: https://www.amazon.com/Summerita-Rhayne/e/B00MZQ0PUC

His Christmas Surprise  at no.68 http://www.amazon.com/dp/B06XS6XZ7J&nbsp;

UnexpectedValentines at no.53 in short stories

Against All Rules at no. 13 in Asian books 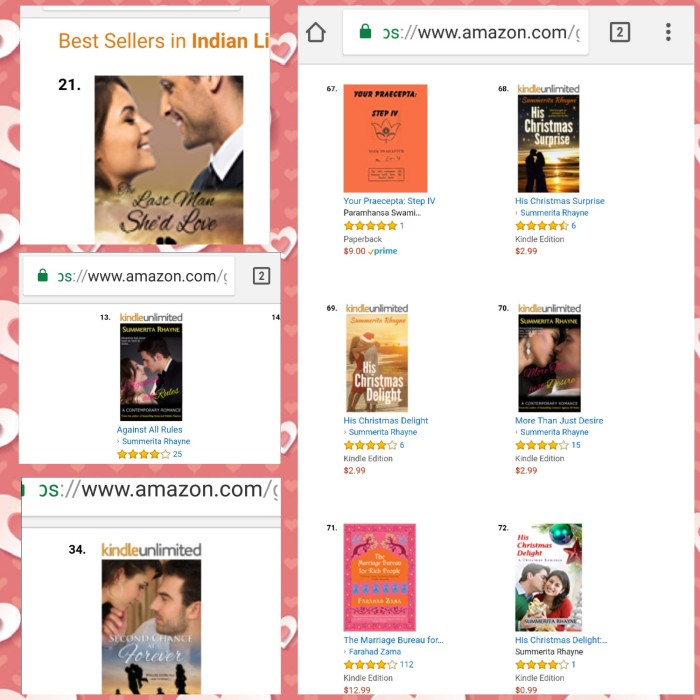 Hi all, today I am happy to share some nice book news that I came across. Seems Second Chance At Forever is doing good at Amazon. Found it at no. 38 in its category at Amazon US. 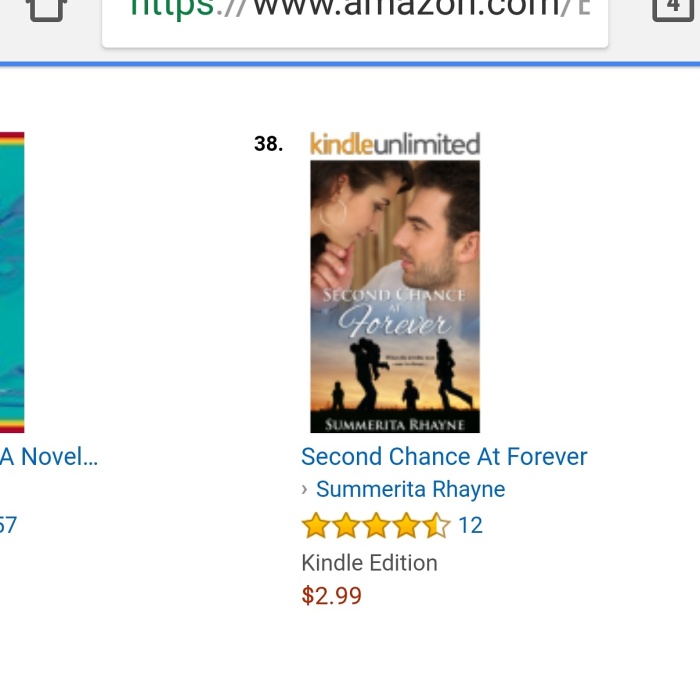 #SecondChanceAtForever  #SCAF at no.38 in its category at Amazon. com. A heartwarming romance about second chances.

You can add the accompanying picture as well.

Sharing a snippet from wip for #TeaserTuesday

“You were unwary enough to show a side of you I wasn’t supposed to see. Don’t you think we’re a bit past that?”

Two books shortly to be on kindle deals. Save the date.

Here are the links:

Each book will start at 99cents and remain at this price for 36 hours and one dollar increment will follow for another 36 hours before it returns to its original price value.

More sweet and spicy books at:

It’s World Book Day today, and like all book lovers, and aficionados of the written word, I’m sure you are celebrating books and reading today. Books have given me so much that it’s hard to start telling. Through difficult times, through leisure and through daily, uninspiring routine, books and especially, fiction has taken me to different worlds and made me journey with a host of personalities. If I were to be asked which is my favorite book it would be hard indeed. Raising my coffee cup, to all those wonderful authors whose thoughts were so powerful as to whisk me away to the world they inked.

So in honor of this special day, Sweet and Spicy books has a special giveaway. All you have to do is name your favorite book or author in the comments (because sometimes books are hard to name, I understand) and you win one book from these.

Just name the book you’d like to read and you win one ecopy of your choice from my books.

http://www.amazon.com/Summerita-Rhayne/e/B00MZQ0PUC
Leave the name of the book you’d like to read and the name of your favorite book/author in the comments. You are welcome to share why they are your favorite.

Happy to find Second Chance At Forever is in top 100 paid contemporary romances at Amazon India.

Here’s something about the book:

What happens when the terrible twos come in threes?

Stuti loves being a mother to her triplets, but it can be a harrowing routine. She’s even more submerged in the craziness when she takes them and her mom-in-law for a trip to Rajasthan, the land of the erstwhile Thar desert royals and their palaces. After the passing away of her husband, she feels she owes it to her to take her to her favourite holiday. In the Amber Palace, her reckless toddler rushes onto a modelling shoot. As she picks up her daughter who has tripped over a gorgeous zardozi sari, her gaze clashes with that of the man she’d hoped never to set eyes on again in her life.

Revath was everything she wanted in a man, but six years ago he chose to walk away from her.

Revath knew the moment he met Stuti again that he couldn’t just let her go. He doesn’t believe in forever, so what’s he doing asking her for a second chance?

At no.44 in top 100 paid in contemporary romance at Amazon India 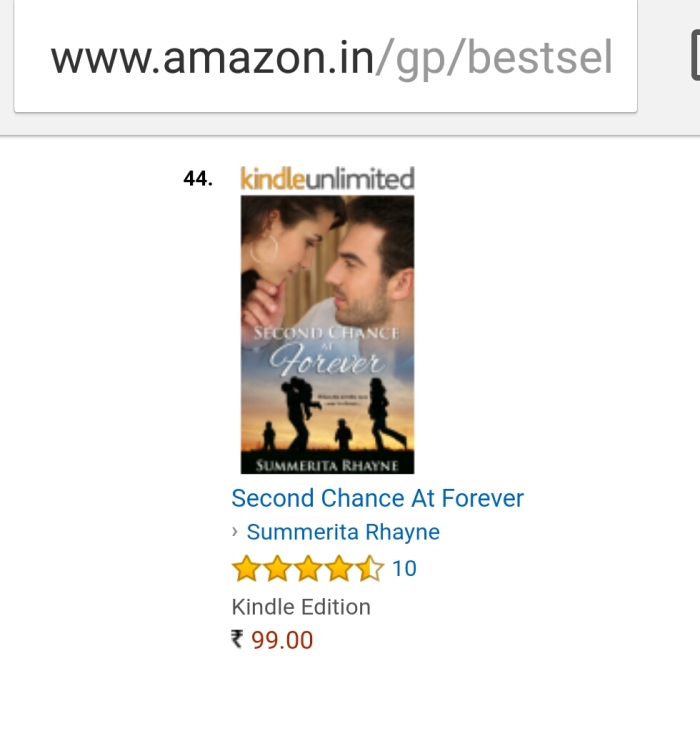 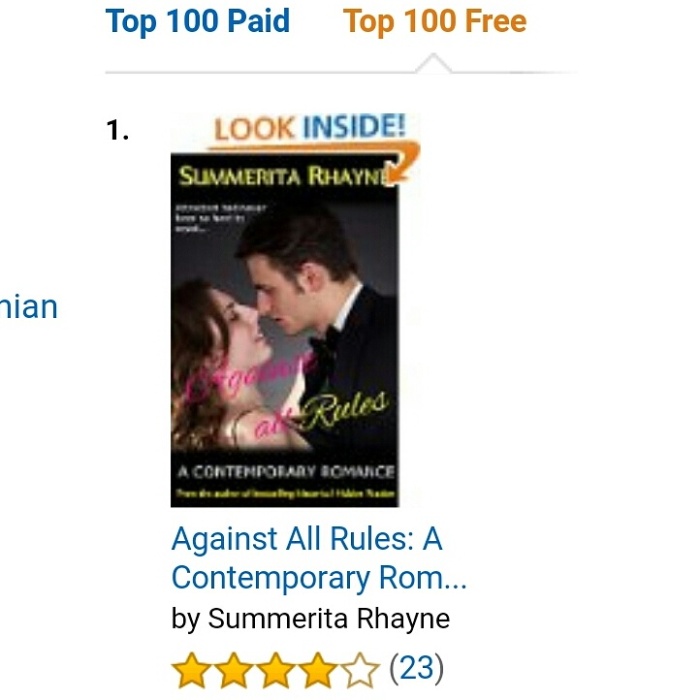 Romance readers please enjoy free download of romance novel Against All Rules at Amazon on 5th and 6th Nov
https://www.amazon.com/dp/B00MY2QVRS
If you like share about the giveaway and if you like reading it and have a minute free, do leave a review.