Starting from light hearted story, Unexpected Valentine, it explores shades of love and romance through serious Chained to Shadows and up to intergalactic travel romance in Hooded Desire. Right and Wrong deserves special mention for being a contest winning story picked up by Harper Collins India.

Stories in this collection:

Unexpected Valentine
Sanjana goes off to stop noise pollution in her neighborhood and runs into a handsome but drunk stranger.

The Magic Within
Why can’t Kaira get rid of the dark memory in her past? Will it end up rocking her marriage?

Chained to Shadows
Victor is ripped apart by the loss of his wife. It’s convenient to blame someone…

Right or Wrong
Two men proposed to Raina, six years ago. She’s married to one while the other professes to still love her. Who is right for her?

Love at Loggerheads
Two lawyers, who are each other’s polar opposites.

Coffee and Clashes
Ritvik Malhotra is the arrogant builder bringing down Isha’s grandmother’s shop. Or is he?

Hooded Desire
Rivals or friends or something more? An intergalactic mission tests Aurelia in more ways than one.

Check out the collection at Amazon:

And here’s the new cover 🙂 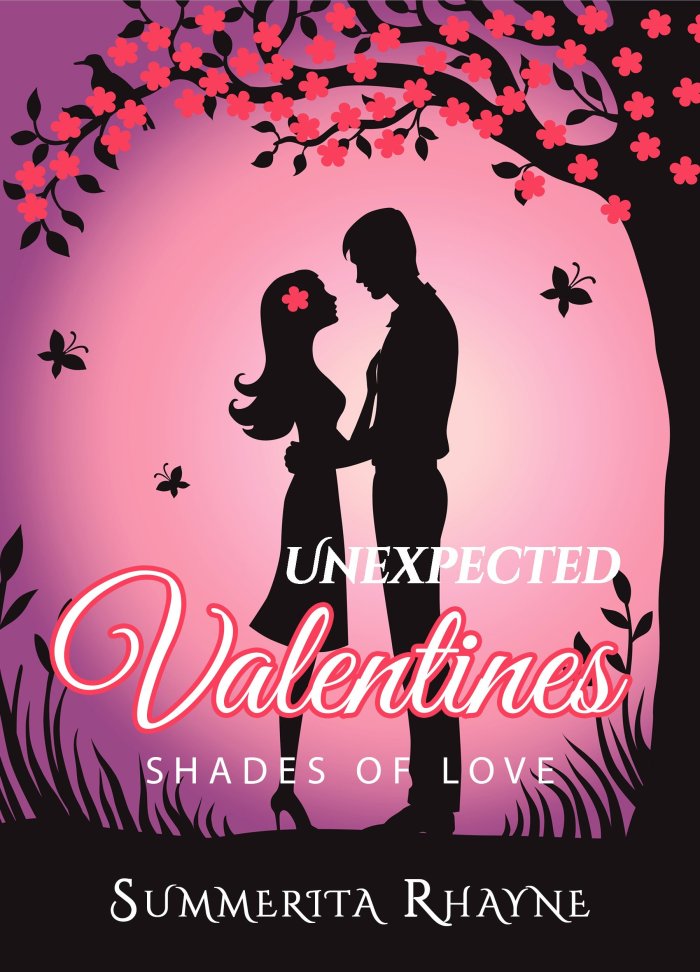 If you enjoy short reads, do pick up the book.

​Romance is something you can’t have enough of, especially on Valentine’s day. So here’s a short romantic read for you. Happy Valentine’s! Do leave a comment if you like it and feel free to share the pic.

She was waiting outside the shop, pacing. ‘Oh, you’re half an hour late. Been with your friends again, I’ll bet. Decide what you want, me or your friends?’

He said, ‘I choose friendship.’

She turned away, ran and hailed a cab, crying all the way home.

At the door, a bouquet of roses was propped up, with a card.

It read, ‘To my best friend, Happy Valentine’s.’

She heard a step and turned. He smiled,      ‘Darling, I had to get your cell phone from the office…forgot it again, didn’t you? Your office called and told me…hey, don’t hug me that hard, you’ll break my ribs…!’

My contribution to the Written Fireside group story, Can’t You See which is a collaborative effort by ten authors.
Here’s the link to Part 1 by Lori Connelly

‘Jess?’ she said it cautiously.

The way he said her name, as though spitting out something unpalatable, made hope shiver across her nerves.

‘Yes, Jess. We broke up after a – a particularly nasty fight.’

He ran a hand across his face. As if unwilling to go into the details, he turned away. Then turned back to face her. ‘We were together for three years.’

She reached down to stroke Gertie, needing the comfort of her presence. Sensing her distress, the intuitive little dog pressed her wet nose into her palm.

He stepped closer and she stood up, finding his gaze disturbingly close. How did he manage to look like that? All sexy mussed up male yet with uncanny sensitivity in the green depths that drew her like a weird magnetic field.

‘I have been brushing people off, locking myself up…’ he said, ‘but with you it feels so utterly different. For the first time ever I feel I can say what I feel.’

She swallowed. The words, the vibrant truth beneath them, held her snared.

He shook his head. ‘It’s slightly unbelievable. All the time I’m feeling this insane attraction to you and having the notion that this goes beyond just desire.’

Her throat felt tight, but words bubbled in her heart. ‘I feel that connection too.’

‘Which is why I must share this with you.’ He paused as though to make up his mind, then like a man diving into icy waters, he plunged on. ‘She said that I had lost the capability to love. I was shutting people off so much no woman would ever even think about getting involved with me.

‘I don’t know if that’s true, Amanda.’ His gaze trapped in hers. She sucked in her breath, feeling his pain like her own. ‘I don’t know if I’m capable of feeling anymore. I almost kissed you back there. There’s something here that’s pulling me though I don’t understand it. But I don’t want you getting hurt…’ He exhaled. ‘All that Jess flung at me was in a sense accurate. That I was incommunicative…as cold as stone…enclosed in a cage of my own making… I can’t risk you finding out too late that what you want doesn’t exist.’

She’d never had anything steady with a man. Somehow she had never wanted anything more than superficial and whenever she dated things just seemed to taper off without getting deeper or more meaningful.
But Noah…he had drawn her like a lifeline would draw a drowning woman.

Now he was pushing her away.
Was he right? He sounded like a bad risk. She should walk out of here and leave him.
Or she could rely on what her instincts screamed about him.
What was the right thing to do? The right thing for her?

Noah stood with shoulders stiff, jaw set like a rock. She read a stubborn pride in the stance. But she knew he was more than that. She’d seen the tenderness. And wasn’t that so much the sensitivity he had to warn her off like this?

‘Noah, she was lying. Can’t you see that?’ Taking hold of courage with both hands, she went over to him. ‘She sounds like the most insecure woman alive. She was thrashing you and trying to make herself superior just because she never had to suffer mental trauma. It doesn’t make you any different inside from what you were. You believe me, don’t you?’

She stepped close to him. Then closer. Put her arms around his neck.

He went rigid. For a second, she feared he would wall her off. Then his arms relaxed and came around her. Tightening like a cinch, they inched her next to him till there was no air between them.

‘I don’t know if I can answer that.’ His voice was gruff. ‘This close I can’t think straight.’ He stared right into her eyes. No avoidance this time. Nothing but strong encounter holding on.

Against her his body was hard. On her nape, she felt the scent of his breath. Her breasts crushed against him. One inch more and their lower bodies would touch. Heat enclosed her. For a second, she closed her eyes.

‘Can’t you see you can make me feel? It’s you Noah,’ she whispered.

‘Amanda!’ It was a groan.  Then he submitted to the impulse that had arisen when he first saw her and bent down to seal his mouth to hers.

The world swirled, her senses reeled. Heat, musk and warm delicious male…she was caught in a whirlpool of sensations and visceral impulses. Caught in the urge to melt into his kiss, the urge to let it take over, the urge to never let him go.

At last he lifted his head and reality interceded.

‘For the first time in a long while I have a lot to look forward in my day.’ His voice was husky.

Before she could become a puddle, she said sternly, ‘Remember your promise. We have to go to the group meeting.’

‘And meet Mary,’ he nodded. ‘And after that I want to do something. If it’s okay with you.’

She looked into green eyes, mesmerized by the depths. They were still smoky with the after effects of passion. Her body zinged, thinking way ahead than it should. Anticipation licked along her veins.

She sobered enough to ask, ‘What?’

‘Yes! Oh!’ Her mouth formed a circle as she blushed at her own enthusiasm. ‘I mean, sure fine.’

He smiled, a genuine smile that made tension seep away. ‘And for being nice, you can bring Gertie too.’

She laughed. ‘As though she’d let me keep her away.’

‘She must have an ulterior motive for following me.’

‘I swear she does.’ Her eyes misted. Her heart was full again with the feeling that Rachel was looking over her through Gertie. She’d done her part for sure. If she had any doubts the way he was with Gertie would have removed them.

‘One date at a time.’ Noah said, his voice slightly unsteady. ‘I can’t let it be more than that.’

Looking into his eyes, she knew they were both lying. One date would never be enough.

‘Just so you have something to look forward to for this evening,’ he said and the next moment she was in his arms, fire, heat, passion combining and all but sweeping the ground from under her feet.

‘Bring it on,’ she murmured and then she was lost in his kiss and the world spun away.