Skip to content
Home#Spotlight #Tornadogiveaway Age of Anxiety: Growing up in Post-Colonial India by Indranil Banerjie
Go to Book No. 99
Check all the Books Here

Name of the Book: AGE OF
ANXIETY: GROWING UP IN POST-COLONIAL INDIA 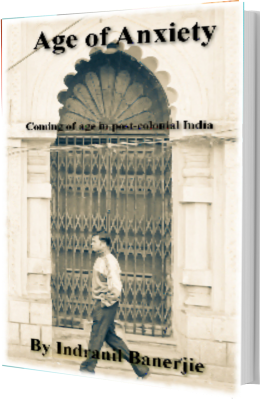 India has been Independent for just about two decades when a young Bengali boy, Sarat Chandra Chatterjee, takes his place within the portals of an ancient school that continues to glorify its colonial past.
India is changing and the city that was once the proud capital of a vast Colonial empire is in rapid decline but the school holds out, white and resplendent amidst the surrounding gloom and depredation.
Sarat Chandra, cut off from his familiar world, is thrown together with a bunch of boys who hail from diverse backgrounds – Marwaris, Anglo-Indians, Armenians and Muslims. Within the school’s portals he must adapt and conform to its ancient traditions. He finds a new name, makes friends and discovers the first flush of romance but struggles to come to terms with his family’s precarious financial situation, which fuels his inherent anxiety.
Much like Sarat Chandra, the city too is grappling to come of age. Mired in post-Independence politics and economic decline, anxiety and gloom has spread through the populace jostling for space in an increasingly crowded and unrelenting city. The elite have taken over the mansions left behind by the colonialists while the poor throng the pavements and empty spaces.
Will Sarat Chandra find his place in the city or is he forever doomed to be the outsider, the ‘mofussil’ boy with an identity crisis?
This is a story about a generation numbed by the anxiety of the Sixties and the Seventies, about music dying in the bars, entire populations quietly fleeing the city and yesteryear’s generation fortifying themselves within anachronistic colonial institutions to hold out against change.
You can also buy @

Indraneil Banerjie
Indranil Banerjie (1960-present) was born in Calcutta, India. The son of a military officer, he grew up in cantonments in different parts of the country and was exposed to the country’s diversity from an early age. He has been writing ever since he graduated from Presidency College, Calcutta, in 1980. He spent more than a decade as a journalist before going on to head a national security focussed think tank, SAPRA India Foundation, for sixteen years till 2011. Currently, he travels, writes and takes photographs and is working on two books. “Age of Anxiety” is his first novel.
Stalk him @
Website | Twitter | Facebook
Go to Book No. 101
Now for the Rafflecopter: Gather as many points as you want to. The more points you get, the more you have a chance to win it all. Show your love for books.. Tweet, Like and Spread the Word… Thank you for being a Reader… You keep the Authors motivated… This is our way of saying a Thank you 🙂

#TornadoGiveaway is an initiative of The Book Club. Click on the icon to go to the event page of the Tornado .. Lots of fun awaits you 🙂